Most hospitals do not frequently take patients to court over medical debt. But since 2015, Carlsbad Medical Center, in New Mexico, has filed lawsuits by the thousands.

The hospital demanded payment in 2012 for what Ms. Price recalled as an emergency room visit for one of her children who has asthma. She could not afford a lawyer, and she did not have the money to pay the bill.

Ms. Price let the summons go unanswered, figuring she would settle the balance — with interest, about $3,600 — when she could. A few months later, she opened her paycheck and discovered the hospital had garnished her wages by $870 a month.

Her car was soon repossessed because she could no longer make the payments. She was on the verge of losing her house, too, when her mortgage company stepped in to help her save it.

“I was going to let it go,” Ms. Price said, tearing up recently in an interview at the Carlsbad Public Library. “It was tough.”

And it was only the beginning. Ms. Price, 40, a nurse and local 4-H leader, has been sued five times by Carlsbad Medical Center, for bills totaling more than $17,000.

It’s not because she and her children are uninsured; according to the hospital, the charges are what she owed after her insurer had paid. But Ms. Price said she had never received an itemized bill outlining exactly what she owed money for. The collection agency wanted the balance in full, and she was not able to work out a payment plan until after she was sued.

In this town, she has a lot of company.

An examination of court records by The New York Times found almost 3,000 lawsuits filed by Carlsbad Medical Center against patients over medical debt since 2015, more than 500 of them through August of this year alone. Few hospitals sue so many patients so often.

Ms. Price’s sister, a police dispatcher, has been sued twice. Her husband has been sued. The county judge who hears many of these cases was once sued, too.

Carlsbad Medical Center is not the only hospital to have filed reams of lawsuits over unpaid bills. In Memphis, Methodist Le Bonheur Healthcare, a nonprofit hospital, filed 8,300 lawsuits from 2014 through 2018, including some against its own employees, according to an investigation by the journalism nonprofit groups ProPublica and MLK50.

In Virginia, hospitals filed more than 20,000 lawsuits over patient debt in 2017 alone, according to a study by researchers at Johns Hopkins University. Just five hospitals accounted for half of the resulting wage garnishments in the state.

People across the country are coping with soaring medical costs, opaque pricing and surprise bills, but these issues are felt acutely in one-hospital towns like Carlsbad, where residents have few options for care — and must pay whatever prices the hospital sets.

“Hospitals that have little competition can negotiate higher rates, because the insurer wants that hospital in their network,” said Sara Collins of the nonprofit Commonwealth Fund. Patient deductibles, which must be paid out of pocket, are rising for almost everyone, she added.

Nationally, more than one in four consumers in 2018 were reported to credit bureaus over unpaid debt, according to the Consumer Financial Protection Bureau. More than half of those reports involved medical bills. One survey of women with breast cancer found that a third of those with health insurance had been referred to bill collectors; among those without insurance, the number rose to 77 percent. 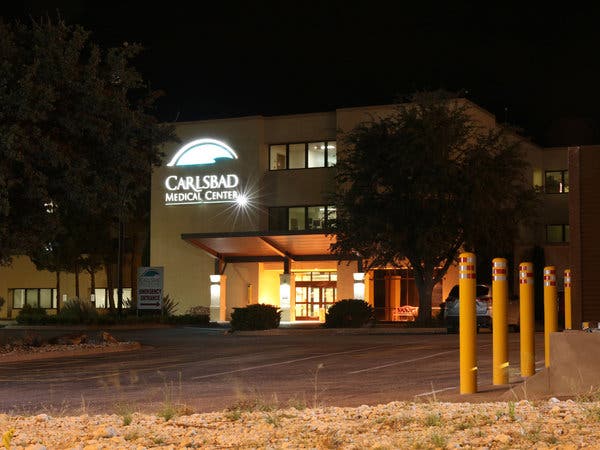 People confronted with medical debt typically drain their savings, the Commonwealth Fund has found, and 43 percent said it lowered their credit rating, suggesting that many of these consumers were reported to collections agencies.

“The majority of accounts from which we seek to collect payment are patients with insurance who have not fulfilled their deductible, co-payment, or coinsurance responsibility set by their health insurance plan — and who have chosen not to enter into a payment arrangement for those amounts,” the hospital said in a written statement.

Following inquiries from The New York Times, the hospital said on Friday that it would no longer sue patients whose incomes are below 150 percent of the federal poverty level (roughly $19,000 for a single person), whether they have insurance or not, and would release current court judgments against any such patients.

Uninsured patients will now receive “discounts” that will bring down their bills roughly to Medicaid reimbursement rates, the hospital said.

New Mexico expanded Medicaid enrollment under the Affordable Care Act in 2014, and most of these patients qualify for coverage. The state is now considering a Medicaid “buy-in” option that would further expand coverage.

A small, sun-baked town once known mostly for its nearby caverns, Carlsbad’s population has ballooned in recent years with an influx of workers drilling and fracking in the oil-rich Permian Basin.

The town’s sole hospital, Carlsbad Medical Center has long faced criticism from community leaders for high prices.In 2013, officials of Carlsbad, which is self-insured, formed a task force called the Mayor’s Hospital Reform Committee to address the strain on its budget over health care costs for city employees. Administrators considered sending employees to neighboring towns for care before they were able to negotiate lower rates for key services.

In a presentation to the state legislature in 2015, the mining company Intrepid Potash, a major employer in Carlsbad, calculated that it would be cheaper for one of its workers to travel to Hawaii for a gall bladder operation — including airfare for two, and a seven-day island cruise — than to get the procedure at the local hospital. The company still encourages employees to seek care out of town when possible.

In May, a nationwide survey by the RAND Corporation found that private insurers paid Carlsbad Medical Center five times more than Medicare would have paid for the same services — about twice the figure in the state overall.

Carlsbad Medical Center is owned by Community Health Systems, a chain of hospitals based in Franklin, Tenn. An investigation in 2014 by the Santa Fe New Mexican newspaper found that the three hospitals charging the highest prices in the state were all owned by that chain.

In 2015, the company paid $98 million to the federal government to settle charges that it had inflated revenue by admitting patients unnecessarily. Community Health Systems admitted no wrongdoing.

In 2018, a unit of the company agreed to pay $260 million to settle charges, brought by the Department of Justice, that it had systematically overbilled for emergency room visits. Company officials noted that the fraud occurred before C.H.S. bought the subsidiary.

There are alternative hospitals near Carlsbad, but the closest is more than 40 minutes away, in the town of Artesia — which residents may find too far to drive to in an emergency. One of Ms. Price’s bills followed an emergency room visit after her daughter broke her arm on the soccer field.

“When your kid’s in pain, it’s hard to wait 45 minutes to get them there,” she said. 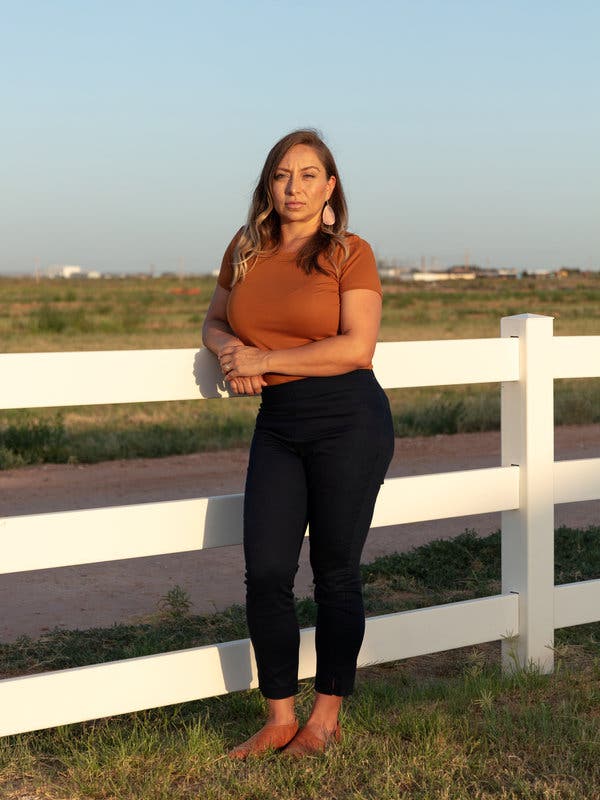 Victoria Pina, 38, an instructional aide who lives in nearby Loving, N.M., visited the Carlsbad Medical Center emergency room several times for a shoulder that repeatedly dislocated.

“For me to be driving over 45 minutes to an hour to Artesia, I can’t make it,” she said.

She’s been sued three times by Carlsbad Medical Center over E.R. bills. After the first suit, she tried to call a number listed on the paperwork to work out payments, but said she never got a return call.

The hospital attempted to garnish her wages, and then placed liens on her home totaling more than $9,000. She and her husband discovered the liens recently when they attempted to refinance their mortgage to a lower interest rate.

Had they been able to lower their house payment, they could have put aside the money to pay the hospital bill, she said. “But because of the lien on the property, we can’t bring our house payment down,” she added. “And that’s hard.”

If Ms. Pina had gone to another hospital nearby, she likely would have escaped a lawsuit. Lovelace Regional Hospital in Roswell, just over an hour away, has filed about two dozen suits over patient debts since 2015.

Artesia General has no debt-collection suits against patients on record since 2015. Neither does Presbyterian Hospital in Albuquerque — which, at 450 licensed beds, is almost four times as large as the hospital in Carlsbad.

By contrast, other hospitals owned by Community Health Systems in New Mexico also regularly file suits over unpaid bills. Lea Regional Medical Center in Hobbs has filed almost 2,000 such suits since 2015. Mountain View Regional Medical Center in Las Cruces has filed about 2,000 suits against patients in that time; almost half of them came just this year.

In Carlsbad, these lawsuits flood the docket. District Judge Lisa Riley, who has been on the bench in Eddy County since 2011, estimated that about one-third of all civil cases that come across her desk involve unpaid medical debt.

The overwhelming majority of lawsuits simply go into default judgment, she said, meaning that the defendants fail to respond — as was the situation in Ms. Price’s first case — and the hospital proceeds to garnish wages.

“Out of those people who do respond, which is very few, the responses almost always say, ‘I admit I owe the money and I’d like to make payment arrangements,’ or ‘I can’t afford to pay it right now,’” Judge Riley said. Hearings on the hospital cases are rare.

Hospital suits over unpaid debt are so frequent in Eddy County, “I had no idea that it wasn’t common practice,” Judge Riley added. “I assumed that all hospitals did that.”

She, too, was a target of the hospital before she became a judge. Her husband had been disputing emergency room charges when the hospital sued; the case was resolved and dismissed. (Judge Riley would not comment further, citing ethics restrictions that prohibit judges from making statements about matters that might appear in court.) 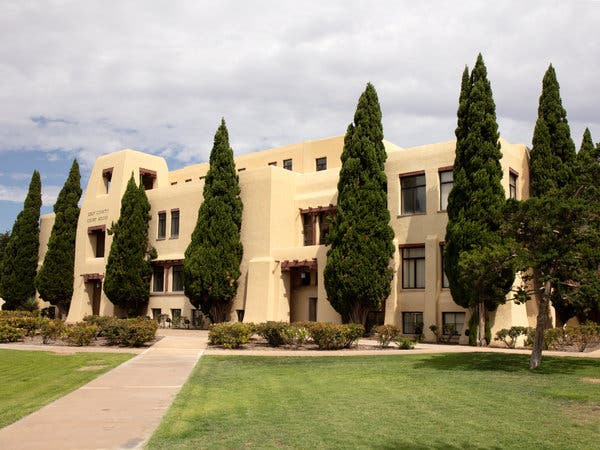 Judge Riley’s case and others from Carlsbad appear in an upcoming book called “The Price We Pay,” by Dr. Marty Makary, a surgeon at Johns Hopkins University who studies the costs of American health care and led the study of hospital suits in Virginia.

Debt collection is common in the health care industry, he said, but lawsuits are a traumatic way to force patients to pay. Normally hospitals simply refer unpaid bills to debt collectors; fewer file lawsuits and then garnish wages or place liens on homes.

In his study of Virginia, 36 percent of hospitals garnished the wages of patients owing money, with 10 percent doing so frequently. (Even his own institution, however, has come under fire for suing the poor.)

When seeking payment for medical bills, “Collections agencies may harass you with phone calls,” Dr. Makary said. “They may send a note to your credit bureau, but they’re not reaching into your paycheck.”

Many of these patients are low-paid workers with little savings. Dr. Makary’s study found that Walmart was the most common employer of those whose wages were garnished over medical bills. “These are hardworking Americans who did nothing wrong,” he said.