KHN: Patients Eligible For Charity Care Instead Get Big Bills

When Ashley Pintos went to the emergency room of St. Joseph Medical Center in Tacoma, Wash., in 2016, with a sharp pain in her abdomen and no insurance, a representative demanded a $500 deposit before treating her.

“She said, ‘Do you have $200?’ I said no,” recalled Pintos, who then earned less than $30,000 at a company that made holsters for police. “She said, ‘Do you have $100?’ They were not quiet about me not having money.” But Pintos, a single mom with two kids who is now 29, told state officials St. Joseph never gave her a financial aid application form, even after she asked.

Pintos said she was examined and discharged with instructions to buy an over-the-counter pain medication. Then St. Joseph sent her a bill for $839. When she couldn’t pay, the hospital referred the bill to a collection agency, which she said damaged her credit and resulted in a higher interest rate when she applied for a mortgage.

St. Joseph denied erecting barriers to charity care. But the hospital’s owner settled a lawsuit from the state attorney general earlier this year alleging such practices and agreed to pay more than $22 million in refunds and debt forgiveness. 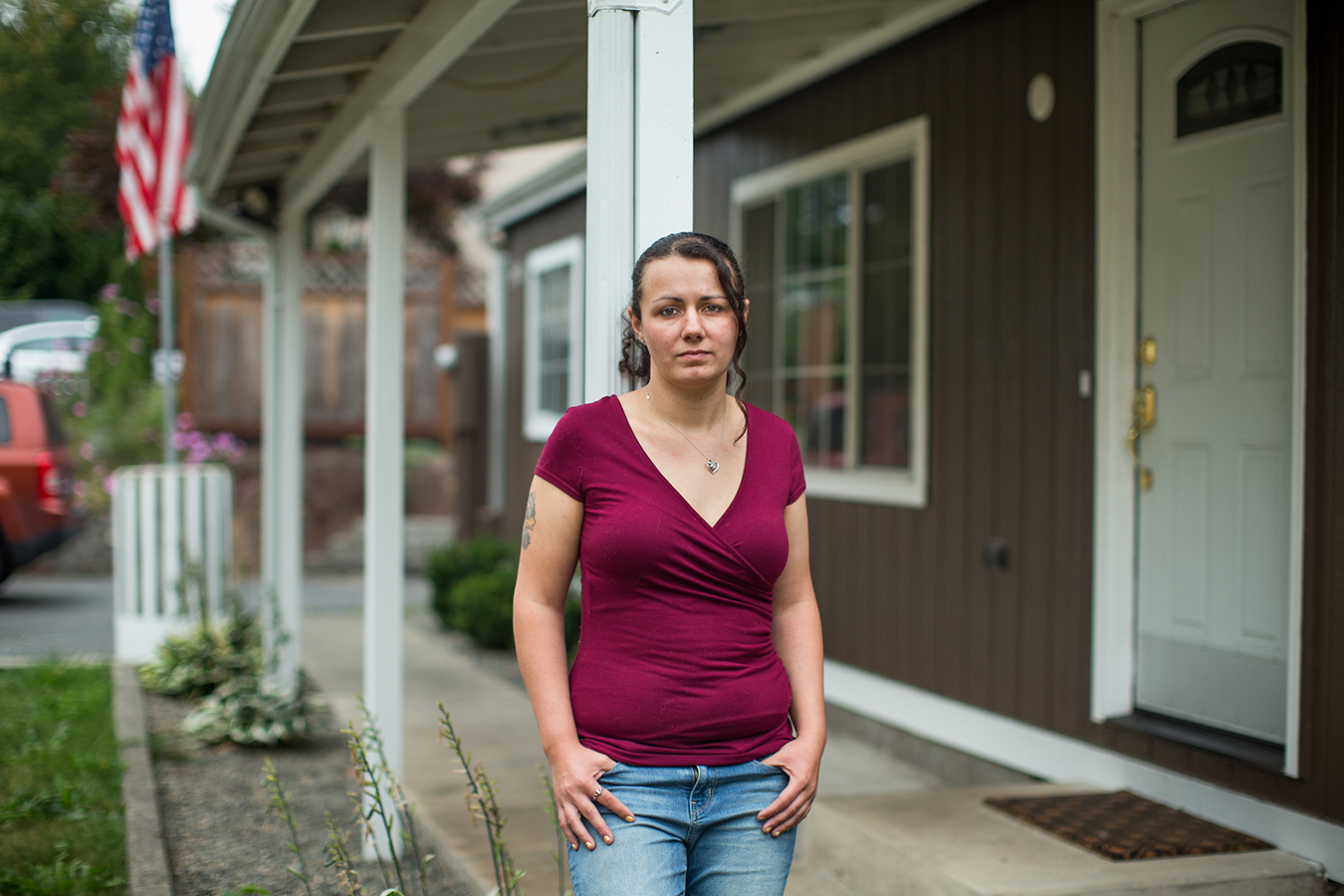 When Ashley Pintos sought emergency care at St. Joseph Medical Center in Tacoma, Wash., in 2016, an employee first demanded a $500 deposit, which Pintos couldn’t cover. After she was examined, Pintos was told by a doctor to buy an over-the-counter pain medication. The hospital later billed her for $839. “They were not quiet about me not having money,” she says. (DAN DELONG FOR KHN)

Under the Affordable Care Act, nonprofit hospitals like St. Joseph are required to provide free or discounted care to patients of meager incomes — or risk losing their tax-exempt status. These price breaks can help people avoid financial catastrophe.

And yet nearly half — 45% — of nonprofit hospital organizations are routinely sending medical bills to patients whose incomes are low enough to qualify for charity care, according to a Kaiser Health News analysis of reports the nonprofits submit annually to the Internal Revenue Service. Those 1,134 organizations operate 1,651 hospitals.

Together, they estimated they had given up collecting $2.7 billion in bills sent to patients who probably would have qualified for financial assistance under the hospitals’ own policies if they had filled out the applications.

These written-off bills, known as bad debt, represented a tenth of all nonprofit hospital bad debt reported to the IRS in either 2017 or the most recent year for which data is available. That sum may represent an undercount because it is based on self-reported estimates from hospitals and is not independently audited. And it does not include money that financially struggling patients eventually paid.

“People, including me, had the impression that these new protections under the ACA would prevent people who should be getting help from being financially devastated,” said Sayeh Nikpay, an assistant health policy professor at Vanderbilt University School of Medicine. “Clearly, this policy isn’t working, and that’s a major failing.”

About 56% of American community hospitals have nonprofit status, which frees them of paying most taxes and allows them to float tax-exempt bonds. In return, they are supposed to provide community benefits including free or discounted care for patients who can’t afford to pay.

The IRS leaves it up to each hospital to decide the qualifying criteria. A comparatively generous hospital may give free care to people earning less than twice the federal poverty level — around $25,000 for an individual and $50,000 for a family of four — and may provide discounts for people earning up to double that.

For those who do not qualify, hospitals often offer payment plans. But they can turn to aggressive tactics if bills are not resolved. Patients can be pestered by debt collectors, and some hospitals sue them or try to garnish their wages. Medical debt can damage credit ratings — one study calculated Americans had $81 billion in collections in 2016 — and forces some people into bankruptcy.

When hospitals give up on collecting a bill, they categorize it as bad debt and absorb the cost of the care, which is indirectly subsidized by the rates they charge private insurers.

In 2017, BJC HealthCare, a large St. Louis-based system, estimated $77 million of its $134 million in bad debt was owed by patients who probably would have qualified for free or discounted care.

Hospitals now owned by Ballad Health, in Tennessee, estimated that $60 million of bad debt in 2016, or 70%, came from patients who might have been eligible for help.

The Hospital of the University of Pennsylvania said $43 million of its bad debt, or 52%, might have involved patients who could have been excused in 2016 from being billed.

While some hospitals say they write off the debt of poor patients without ever resorting to collection measures, several hospitals whose practices were highlighted in news reports this year for aggressively suing patients admitted to the IRS they knew many unpaid bills might have been averted through their financial assistance policies.

A quarter of bad debt at Mary Washington Healthcare, which sued so many patients that a Virginia court convened special sessions to hear the cases, involved candidates for free or discounted care, according to its IRS filing.

So did half of the bad debt at Methodist Le Bonheur Healthcare in Memphis, called out by news organizations for frequently garnishing wages, its filing said.

CHI Franciscan, which owns St. Joseph, said in multiple IRS filings that none of its bad debt arose from billing indigent patients. While Franciscan admitted no wrongdoing in its settlement with the Washington attorney general, the agreement bars the practice of discouraging charity care in the ways alleged in the lawsuit. 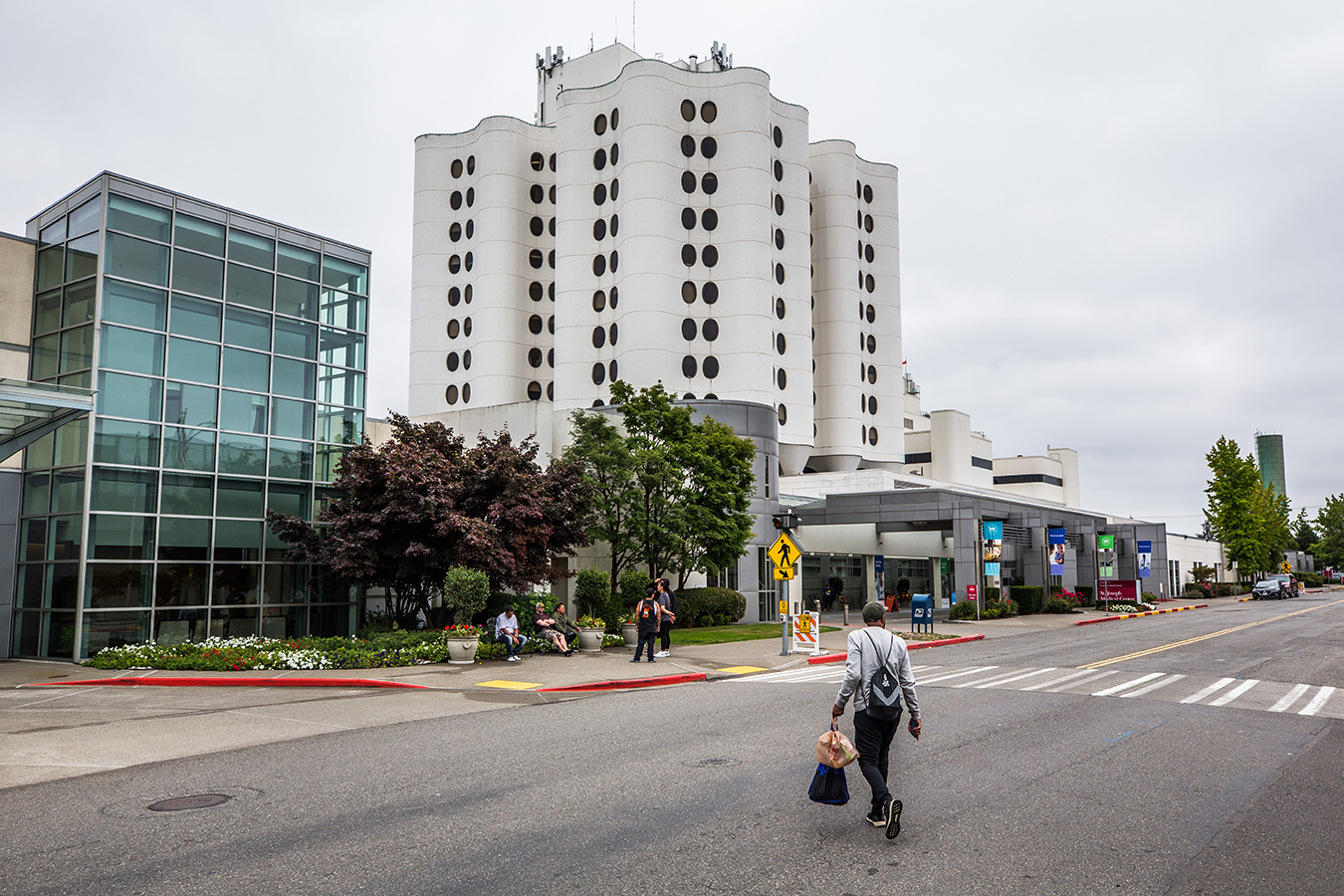 Charity care requests at St. Joseph’s Medical Center in Tacoma, Wash., required so much documentation that half of the requests were rejected, the state attorney general argued in a lawsuit against the hospital. The hospital agreed this year to provide refunds and debt forgiveness to thousands of patients.(DAN DELONG FOR KHN)

“We are exceeding the requirements of state law and providing charity care compensation to patients who may be in most need, even if they never applied for charity care or did not actually qualify at the time of service,” Cary Evans, a Franciscan spokesman, said in a statement. Franciscan declined to discuss individual patients.

According to the lawsuit and interviews with former employees, St. Joseph’s workers were told never to voluntarily offer patients a charity care application. If asked for one, they were instructed to insist on a deposit at least three times. Even when submitted, applications required so much documentation that half of the requests were rejected, the lawsuit alleged.

Internal hospital training documents the attorney general submitted as part of the case showed that St. Joseph workers were advised on how to best collect money from patients before they left the hospital. Instead of saying, “Can you pay today?” employees were told to use phrases like “How would you like to pay for that today? Cash, check or credit card?” according to the documents.

Pintos, who signed a written statement for the attorney general and was listed as a potential witness in the case, said the hospital never gave her an application even though she had qualified for charity care the previous year. “They made me feel like I wasn’t good enough to be there,” she said.

St. Joseph recently erased the $839 debt from her credit, but Pintos still owes $1,611 for care from the ER doctors, who have their own practice group and do not have to follow the hospital’s charity care policies, according to Franciscan. That bill remains in collections.

Nonprofit hospitals provide roughly $14 billion worth of charity care a year, about 2% of their operating costs. But their policies can have notable exemptions, such as excluding bills from doctors who are not on the hospital payrolls.